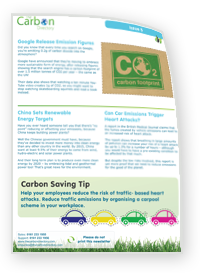 Every day it seems like there’s a new environmental issue to contend with or news article to read. But we know that you don’t have the time to scour the news pages to see how low-carbon technology is developing, or to find out about the plight of various rare species.

That’s where The Carbon Directory Newsletter comes in. Our downloadable newsletters provide you with regular summaries of the leading news stories in order to keep you up to date with the latest environmental developments. What’s more, we also share an energy-saving tip to help you reduce your own carbon emissions.

Issue 9 - Could Smog Harm The Olympics?

A rise in air pollution could cause problems for athletes at the London Olympics.

London Mayor Boris Johnson has unveiled an environmentally-friendly initiative that's going to save the city millions of pounds.

A Tanzania-based company has recently gone bust, meaning that land it acquired from local residents has been sold on, leaving the villagers with no land on which to work or farm.

Google have announced that they’re moving to embrace more sustainable form of energy, after releasing figures showing that the search engine has a carbon footprint of over 1.5 million tonnes of CO2 per year – the same as the UN!

A recent survey has shown that 61% of adults would consider installing solar panels or a biomass boiler – but almost none of the participants knew that the government’s ‘Green Deal’ would help them pay for it.

Issue 3 - Plastic Bags Back on the Rise

One of the success stories of the last decade was the decline of plastic bags. Between 2006 and 2009, plastic bag use was down 40% - but that’s all changed over the past 18 months.

For years, architects have tried to create an energy efficient home. But now, research from the University of Salford shows that a design that’s 50% more energy efficient was actually built in the 1980s.

The government’s top climate change minister, Greg Barker, has announced to parliament that biomass and recycled wood will fill an important role for meeting the UK’s renewable energy needs.

Make a start on saving the environment.

Partially offset your carbon emissions with The Carbon Directory

Do your bit for the environment by offsetting all your carbon emissions.